"It was a cold Autumn morning. The sun was not yet up as the old man made his way along the track that led across Cherrington Common. The track became quite steep as he walked down to the small valley where he knew he would find a good crop of nuts waiting to be picked in the morning dew.

As he approached the valley the faint sound of tinkling bells reached him across the fields to the south. He stood and listened. The noise grew louder. Then quite suddenly from over the hedgerow leapt a horse and rider. The bells jangled loudly as the horse landed after its unnaturally high jump. The man's blood froze as he saw the rider; a black-robed, ghostly figure, an ethereal corner of the rider's garment flicking at the man's face as the pair galloped off up the valley and disappeared into the darkness.

The man turned and ran, passed the barrow at Crackstone and not stopping until he reached the comparative safety of the High Street of Minchinhampton."

Cherrington Common, or Down as it was sometimes called, was the location for the afore told legend. Today we only recognise one small part of it, that enigmatic place known as "The Devil's Churchyard". The area in question is located about a mile due east of Crackstone, on the track that leads to Dunkerpool, and it was here that the horse and rider disappeared. In another incident it is recorded that two shepherds, whilst guarding their flocks, saw this same figure, and again it was early in the morning.

It is better known, however, for its religious legend, rather than its ghost, and indeed this is most probably how it acquired its bizarre name. The story goes like this.

The incumbent of "Lammas Park", in Minchinhampton, decided that a new church was to be built, enabling Christianity to gain a stronger hold among the heathens of the neighbourhood. To this end, work was undertaken to build the structure on Cherrington Common. However, all did not go well for, we are told, the site chosen for this new edifice was an ancient site of Pagan worship, and, legend has it, all work that was accomplished during the day was at night torn down, supposedly by the devil. Eventually the work was abandoned, and the new church was constructed on its present site in Minchinhampton itself. But the saga didn't end there, for it is also said that the relevant clergy had the "pagan" stones removed and placed in the grounds of "Lammas Park".

It was in order to try and establish whether there was any truth in this legend that I began my research into the Devil's Churchyard. For were it to be proved correct it would establish the whereabouts of either standing stones, or even possibly a stone circle.

First, let us look at Minchinhampton Church. First started during Norman times, it was still being added to in the mid-1300s. Here is our first real clue, for although that area of the countryside was granted to the Abbess of Cam by William the Conqueror (and indeed there was a Priory in Minchinhampton from that time), "The Lammas" doesn't begin to show any importance until the late 1200s. The family home of the de la Mares, from which the name "Lammas", according to some sources, derives, it became the property of one John de Annesley when he married the widow of Peter de la Mare in the early 1300s. This act also made him Lord of Cherrington and therefore his lands included Cherrington Common. This in itself may not seem important, but when you consider that he was responsible for the building of the chantry and chapel dedicated to St. Mary the Virgin, in which his, and his wife's, tombs are an integral part, the light begins to dawn. Suffice it to say that he was probably the first owner of "The Lammas" that had any real involvement in church building in the area.

There are other men to whom the action in question might be attributed. One was the Rev. William Cocklin, who again lived at "The Lammas" and was rector of both Minchinhampton and Cherrington. Though not particularly concerned with religious construction work he was reputed to be "a good christian" and out of concern for his flock could have had the stone at Cherrington Common transported to remove pagan influences. The only other probable time for the stones to have been moved is during the Bishopric of Hooper, Bishop of Gloucester. At this time the Protestant church was particularly zealous in its attempt to convert the local populace.

There are some grounds to suggest that Paganism was practised in that area until comparatively recently. An account of the churchwardens dated in the 1570s says that money was expended for; "pullynge down, dystroyenge and throwynge out of the churche sundrye superstycyous thinges tendinge to the mayntanaunce of idolatrye". So we can imagine what it would have been like in the countryside if the church was full of such things. Certainly there were places in the area that appeared to have had a ritual function in the past. For example, to the north west of Devil's Churchyard is a depression in the ground of circular shape where artefacts and bones have been excavated which seem to indicate cremation rituals, and of course, there are numbers of barrows and standing stones.

Impression of the altar stone of the ram headed serpent god,
found near Bisley

An altar stone dedicated to the Ram headed Serpent god was found only a few miles away suggesting the existence of a Cernunnos cult nearby. The legend itself suggests this. Suppose the leader of such a cult wore a horned head-dress? He takes his followers every night to tear down that which corrupts his sacred site and place of worship. Surely then the local Christians would see "the Devil" destroying their work. More recently, there are accounts of both wassailing and May Day celebrations when the children had to perform certain dances carrying beech twigs which were to be thrown away on the stroke of noon lest the child should be named "May Fool". 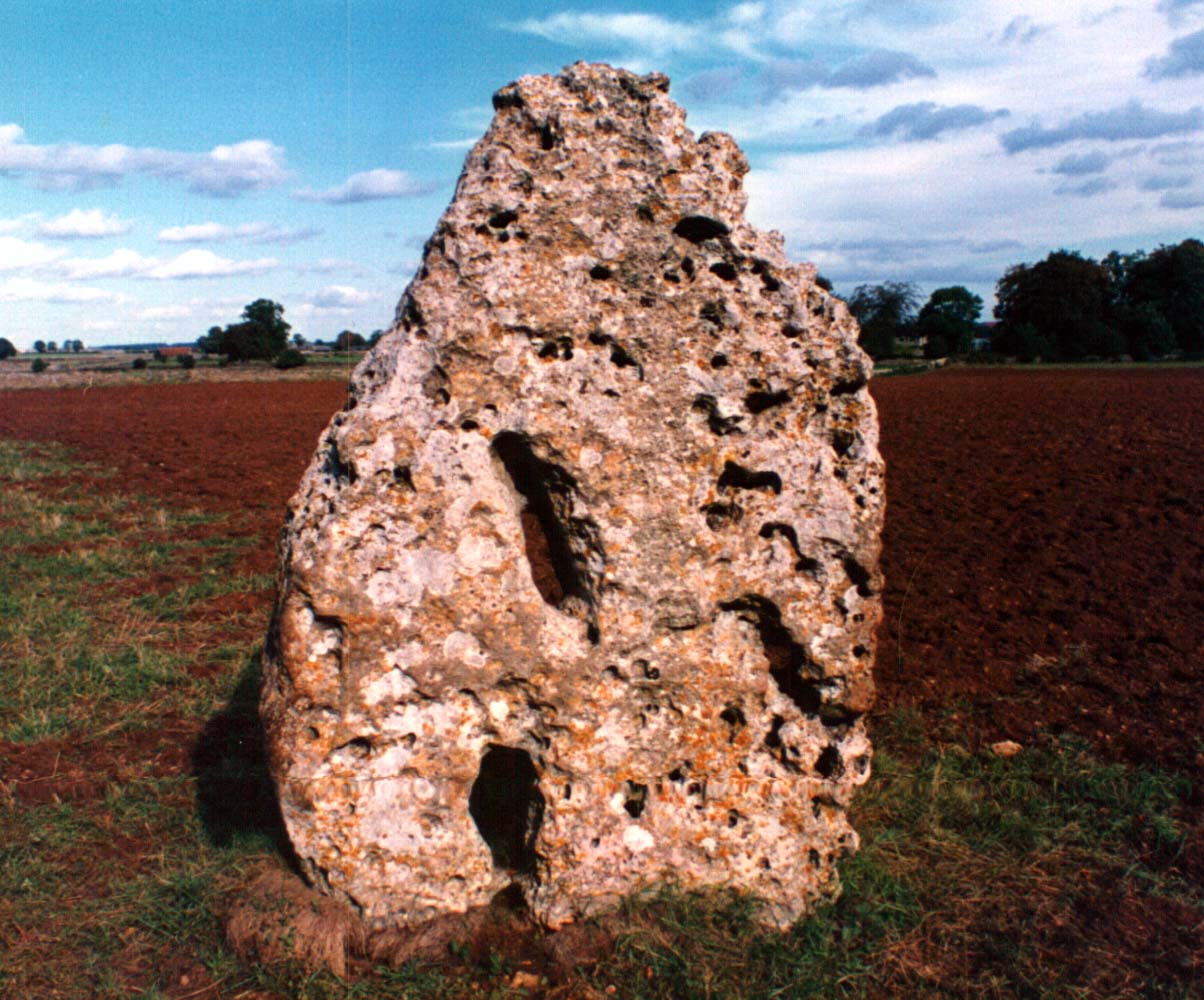 The Longstone at Hampton Fields near Minchinhampton

The area around Devil's Churchyard is of more interest than the actual place. Our "ghostly rider" came from the area of Gatcombe where we find two monoliths; the Tingle Stone, sited on a long barrow, and its near neighbour, the Longstone. The latter also has an interesting legend associated with it, concerning its moving to Minchinhampton spring to drink, in much the same fashion as the "Whispering Knights" at the Rollright stone circle. Then there is the aforementioned circular depression to the north east and the now-destroyed barrow at Crackstone. Besides these, there was another stone, known as the "Cobstone", situated due east of the Longstone on the edge of Minchinhampton Common. Add to all this the legend of the Black Dog of Woefuldane Bottom, and you begin to see what an interesting area for study this is.

To return to the Devil's Churchyard, it is quoted that a Mr. A. Simmonds of Minchinhampton remembers his father saying that the stones originally stood in a circle. This hasn't helped me in dating their removal since I can gain no information concerning the date of the interview; however, I surmise that since the Gloucestershire Archaeological Association visited "The Lammas" to view "the stones" it was taken at this time. So that gives us the two most likely dates - first in the late 13th/early 14th century and again in the early 19th century.

Only one cloud appears on the horizon to suggest that the theory of a stone circle is unfounded. In the Transactions of the Bristol & Gloucester Archaeological Association, Jowett Burton claims that the area in question was in fact little more than an outcrop of rock which did indeed form a natural circle with a clay-like centre having been washed away and so showing the rock in its circular form. In a later conversation I was informed that a geological survey proved this to be the case, though I've yet to find that particular piece of evidence. If this proves to be correct then we have the logical explanation for the stone being taken away. John de Annesley would have needed stone for his new church building, and what more natural place to take it from than a quarry on his own manor, thus saving him the expense of buying stone. Again, in the early 19th century many other stones, including the "Cobstone" were removed and used as building materials; perhaps at that time new construction work was carried out on "The Lammas" itself.

What is left of The Lammas stones can be seen to this day. They are that same famous "Holy Stone" of which so many other monoliths are made, therefore for the time being I'm keeping an open mind about the enigma of the Devil's Churchyard.