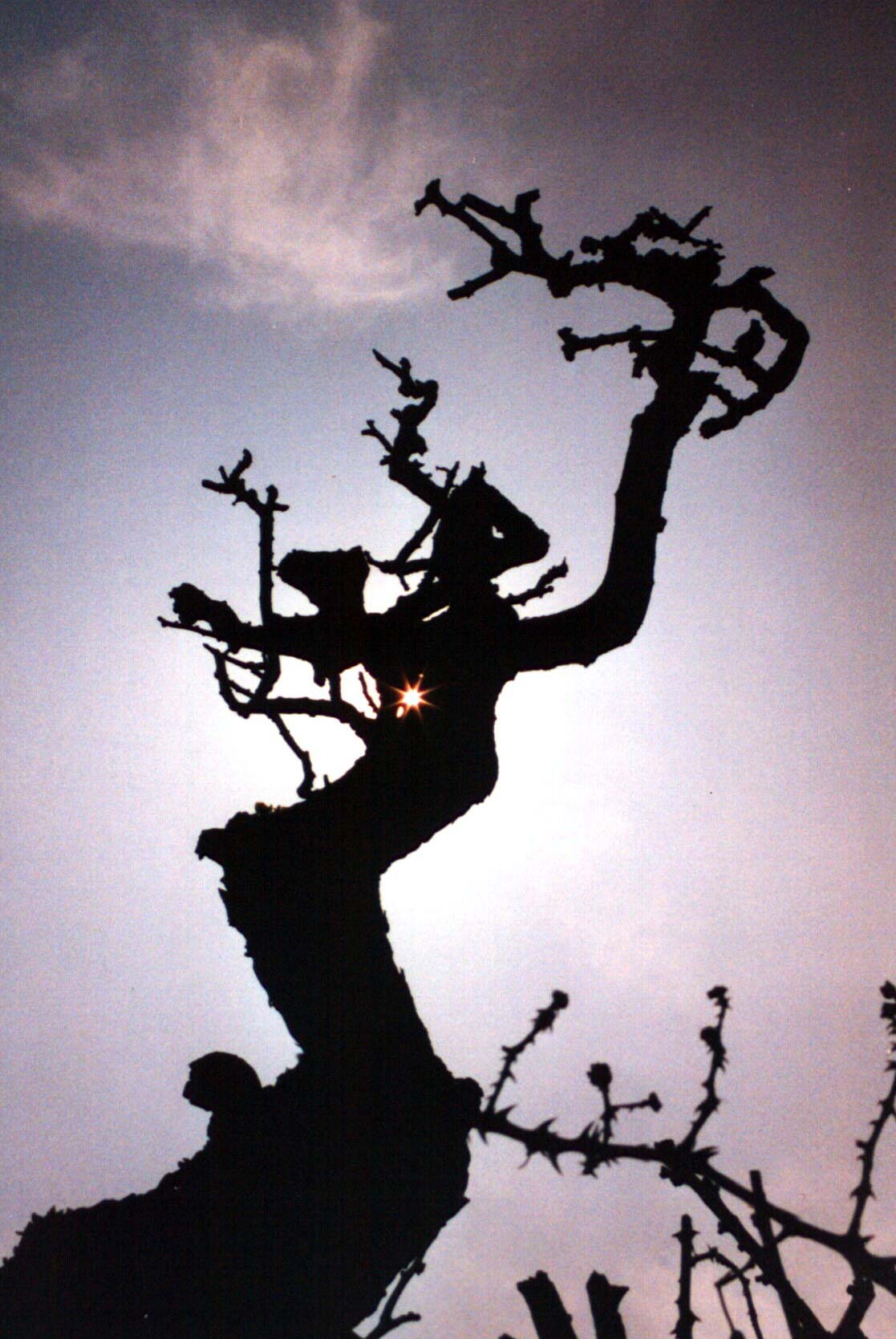 This page contains legends, stories and other lore about trees.

The legend of The Witch of Kemyel

The Witch Tree at Ramsbury

One evening in the springtime of 1986 I received a 'phone call asking if Five Bar Gate, the folk band I play with, was available for a booking. Nothing unusual in this, it's the time of year when all and sundry phone up to book the band for summer barn dances, weddings, ceilidhs, birthday parties, anniversaries - if it needs folk musicians we enjoy helping people celebrate. This booking was, however, a bit different! It didn't concern me when the caller mentioned that the event he was ringing about was to be held in the autumn of that year, but it I did start wondering when he went on to say that in either October or November the event was to be held outside. He then went on to elucidate.

The proposal was that Ramsbury was going to have a new tree planted in the centre of the village. All very well, and I'm all in favour of new trees anywhere - but councils don't usually make much fuss of a tree planting, unless it's to get some councillor's picture in the local 'rag' with a spade in his hand. But Ramsbury is different - the Ramsbury Elm was famous around Wiltshire - both as the emblem of the Ramsbury Building Society (since 'gobbled up') and for the ancient legend attached to it. Long ago, in the mists of time, legend tells that a witch was buried in the roots of the tree, there to stay imprisoned forever in the roots - so long as nobody disturbed the tree, in which case the witch would wreak havoc and destruction upon the countryside. In the spring of 1986 the tree had long been nothing but a rotting stump - I think it's demise far preceded the terrible advent of Dutch Elm Disease in our countryside.

The plan was to dig out the old stump and replace it with a young, but flourishing, oak tree. A whole day of celebrations was planned starting in the morning with the digging out of the stump accompanied by a brass band and going on into the evening with, very appropriately, people doing circle dances around the newly planted oak. The event had to be held in late autumn because they were planning to use a system of planting which was reasonably new then which involved lifting a quite large sapling with large root ball and transplanting it. This system would allow them to plant a much larger tree than is usually transplanted. Now the band would not normally consider playing outside at night in late autumn but with this being such a historic occasion in the realms of folk tradition and heritage, if they were going to replace the tree we wanted to be a part of it. I did stipulate, however, that we would require some sort of cover over us to protect the instruments and 'electrics' just in case it rained. An agreement was reached and the date duly noted and I gave it no further thought until autumn.

Eventually the set date arrived, and I sat in my warm office in the morning and looked outside at pouring rain and leaves being whisked off trees by a very brisk wind. However, by late afternoon things were looking a bit better and the sky had begun to brighten before sunset - it at least turned from a deep pewter to something resembling battleship grey! Nothing daunted, we arrived in Ramsbury in early evening ready to set up the band and celebrate the planting of the new oak. The 'organisers' had arranged a covered stage for us to play on - well, a farm wagon with a very fetching tarpaulin draped over it. However, they had complied with our wishes and provided cover and in such a rural setting for such a rural purpose a farm wagon was quite appropriate. We were to feel very thankful for both the wagon and the tarpaulin within a very short space of time.

It did stay dry whilst we unloaded instruments and sound equipment, it even stayed dry whilst we arranged ourselves on our makeshift stage. It fooled us into thinking that as there was not really enough space for the sound engineer, sound mixing desk, speakers, etc., under the tarpaulin they would be alright on the pavement in front of the wagon because it wasn't raining.

People started to gather around the tree, it seemed that every family in the village had turned out. All the little girls were dressed as witches, all the little boys as scarecrows - all the parents had thick coats and carried umbrellas! We were told that the brass band had been "rained off" in the morning. My immediate thought was that if I'd been asleep for centuries tucked up in the cosy roots of a tree and somebody had come along and prodded me awake with a JCB, overturned the bed and then blasted me with brass band music I would have been less than happy and seeking revenge!

Following an introductory tune or two, the Caller got everybody together and the first dance started - and so did the rain, the lightning, the thunder and the wind. People stoically danced on for that dance. Then even for a second dance - whilst the band huddled under the tarpaulin trying to protect their instruments, and the sound engineer and bass player tried to grab some cover to protect the electrical equipment from the torrential rain. It was thought expedient after that to judge the children's fancy dress (witches and scarecrows) so that they could put their raincoats on - they were by this time already soaked to the skin! After that, with the rain getting harder, and the lightning more frequent, it was decided to do just one more dance and call it a night - outside at least. During the third and final dance the water seemed to be up to people's ankles and I swear I could hear the cackle of a witch's laugh in the wind!

After that mothers and children dispersed to their homes whilst those without children to get dry and to bed made a hasty retreat to the pub behind us, accompanied of course by the band. There wasn't a lot of room in the pub that night, but we managed to find a corner to sit and play to celebrate the planting of the tree. In fact, we did have cause for a double celebration that night. It was the first night of the year for Beaujolais Nouveau and a team from the pub had taken part that day in the annual race to get supplies back from France. As people warmed up - both from the fires and the alcohol - people started singing and dancing. A good night was had by all, and the tree was certainly well watered in!

But - what happened to the witch? Well, that night a tornado hit Swindon, roofs were ripped off houses and quite a lot of damage was done in the town. Surprisingly, not a lot of trees were damaged, nor hedges, nor other parts of the countryside. I am sure she was a 'green' witch who loved trees and the countryside - as all witches do. I am also sure that she deliberately chose an urban area to let us know of her displeasure at her rude awakening. I believe that she blessed the new oak tree, it certainly seemed to be flourishing when I visited it on 19th April '98. I HOPE she has found peace.

THE LADY OF THE SILVER BIRCH

It was late when I made my weary way to bed and as far as I can remember I was sleeping peacefully until I was taken by the need for the bathroom and woke up. It was about 3.30 am.

I was just about to go into the bathroom when I glanced out of the window. I could see the trees outside quite clearly. Three lovely young Silver Birches that had been planted in the garden when the flats had been built. They had been small trees, strapped up and supported. It was up to the residents to look after them and John loved them and had made sure they thrived and had freed them from their restraints when they were ready.

I looked again at the trees. The light from the Moon was very bright and there was also light coming from the nearby street lamps so I could see the m quite clearly. That night there was something different about the one in the centre. It looked like a figure standing in the moonlight. I rubbed my eyes and looked again. Surely not, I thought. It looks like some one is standing there. I walked slowly to the window and looked out. What I saw is something that will stay in my memory for the rest of my life.

She was standing there with her back to me. A woman moulded into the tree. She had long dark hair and her arms stretched up and out, a part of the branches. She was looking towards one of the other trees growing beside her.

I have been a pagan all my life and am a Wiccan High Priestess and I knew I was looking at the Deva of the Silver Birch. I stood there looking at her for about five minutes. I spoke to her, thanking her for the gift of seeing her. I told her how very beautiful she was. Eventually I had to go to the bathroom but before going back to bed I took one more look through the window. She was still standing there just as I had left her. I said goodnight and went back to my bed….. smiling.

I had been blest. All my life I will remember the Deva of the Silver Birch and feeling the awe and humility that went with it. I have spoken to the tree on a few occasions since and I have placed a circle of tiny crystals around the base as a thank you for that magical night.

I wanted to share this experience with the readers of "Twisted Tree" and I know that you will be as awed as I was. We are in touch with the living planet and our love and protection of her now and again reaps rewards in ways we cannot imagine until it happens.

Back to Twisted Tree Home Page